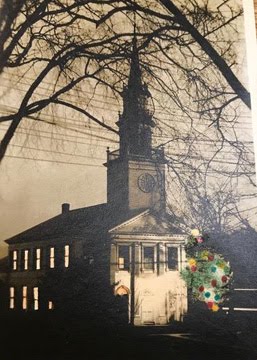 This photograph of a postcard from the late 1920s was signed and sent by Rev. Cecil Eli Pearson (1899-1982) and his wife, Mary. Note the hand colored Christmas tree at right of the meetinghouse.
Cecil Pearson was a Quaker, and in 1920, after World War I, he worked with American Friends’ Reconstruction in France.