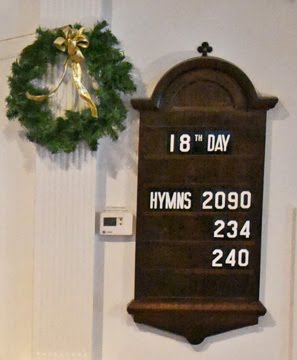 Donations from many church members
The two hymn boards we see on the sanctuary’s north wall were made in 1988 by Walter Kusiak of the Weatogue section of Simsbury. Bob August of Avon stained the boards and Roy Read of Avon provided the hook. The boards were made possible by the Special Gift memorial fund in memory of Henry McLaughlin.

Hymn books were donated in 1919 for the church’s Centennial, and later editions were donated by Maud Ely Gibbons and also the Hunter family. Our present hymn books are donated in honor or in memory of loved ones. The hymn racks in our pews were widened by Roger Winslow in 1972 to accommodate both hymnals and pew Bibles. The prayer card holders were installed between 1965-1975.