Little-known Rev. Whittlesey Served ACC for a year in 1850s 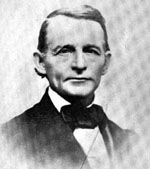 Rev. John Smalley Whittlesey (c. 1812-1862) was, it appears, interim pastor here at Avon Congregational Church from 1853-54. He was educated at Yale Seminary. Very little is known at this time about Rev. Whittlesey. His name and his connection to ACC appears only in a short, handwritten note at the United Church of Christ (UCC) Conference Archives in Hartford that was written by a historian over a century ago who was collecting information about local churches. The 1850 census listed him as age 36 and a Connecticut-born “clergyman.” Photography courtesy of Ancenstry.com.