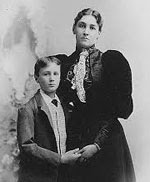 In 1932, Sara Roosevelt, the mother of New York Governor Franklin D. Roosevelt, attended a wedding at Avon Congregational Church on May 28. Franklin Roosevelt would be elected president the following November. Also attending the wedding was Edith Roosevelt, the widow of President Theodore Roosevelt. The women were in Avon for the wedding of Corinne Roosevelt Alsop, the daughter of Mr. and Mrs. Joseph Wright Alsop and the grand niece of Theodore Roosevelt. Corinne was marrying Percy Chubb. Rev. Dr. Percy Kammerer, headmaster of Avon Old Farms school, performed the wedding. The reception was at the historic Alsop home, Wood Ford Farm, at 45 Nod Road here in Avon, which is still standing today. In the photo from Wikipedia, Sara Roosevelt is pictured with her son, Franklin D. Roosevelt.